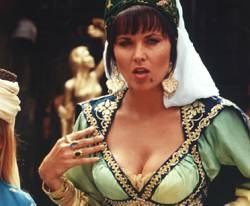 About: Lucy Lawless is a born beauty. She won the Mrs. New Zealand pageant in her homeland, which landed her a part on the hit comedy series Funny Business. There was nothing funny about this brunette's appeal. She rode the vehicle of her good looks to other indigenous productions like Within the Law (1990), A Bitter Song (1990), and The End of the Golden Weather (1991) before landing a role on the hit series For the Love of Mike. For those who love Lucy, she took her career to the next lusty level, moving to the U.S. and finding work on The Ray Bradbury Theatre, The X Files, and, most importantly, on Hercules: The Legendary Journeys. She was first cast as Lyla but later tried out for the ass-kicking Xena, was cast, and dyed her hair to distinguish herself from the prior role. Xena was such a tempting warrior that her character was spun off, and the rest is history. Despite her name, Lucy's film and TV career has been very law abiding, at least in terms of breaking the skin barrier. She's strutting about scantily clad, but sadly always clad. For an unintentional peek at Lucy's lovelies, check out the lungful beauty belting out the National Anthem at a Redwings game in Detroit on May 6th, 1997. She also belted out one of her meaty boobs as it rolled out from her descending top while she reached for that illusive high note. Now that Xena is off the air, maybe Lucy will get (intentionally) loose. That made the crowd give her a standing ovation . . . in their pants!

Quote:
On her teasing guest spot on TV's The X Files: "I spent a lot of time underwater and performing naked. Well, actually I didn't perform naked. I credit that to a great body double. I don't do nudity. I'm the mother of two kids."