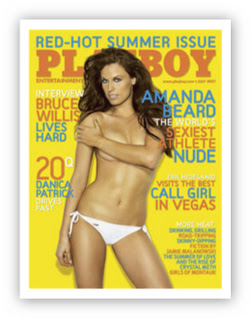 Amanda Beard is one of the best female swimmers this generation of Americans has ever seen, but Americas sexiest athlete? I'm not so sure ...

Yes, she has won seven Olympic medals, but the last time Beard attracted this much attention she was on the podium winning gold in Athens (that's more than most of us can say for ourselves.)

This time? Well, Amanda is featured nude in this months issue of Playboy magazine. She is featured on the cover and in a revealing pictorial. When asked why she did it, Beard said it was simply a business/career decision. But was it the right one?

She’s pretty good looking, but what really sets her apart from any of the of the other thousands of women who appear nude in Playboy is her accomplishments and we all know she got that great body from being active ... and honestly that's something I'm willing to support!
Posted by Shurbhi.in at 02:40