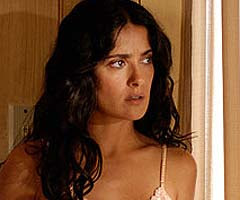 Best Nude Scenes of 2006
# 1. Salma Hayek Tops Best Nude Scenes of 2006. Sure, Jennifer Aniston took a nude walk through an apartment building, but it was Salma Hayek's covorting in the water with Colin Farrell that won Mr. Skin's Anatomy Award and love for 2006. Hayek, who caused boiling water cooler talk the next day after her brassiered appearance on "Ugly Betty," gave it all up on screen for "Ask the Dust," a Depression-era drama that ... well, never mind that. The bottom line is that Hayek skinny dips with Colin Farrell and then bares all for a follow-up sex scene.
# 2. Gretchen Mol, The usually blonde won second place recognition for taking chances as the brunette star of "The Notorious Bettie Page," playing the titular pin-up model and fetish queen. Numerous "artistic" poses abound, including a yuletide one to get viewers in the mood this holiday season.
# 3. Brittany Daniel in "Rampage: The Hillside Strangler Murders" - This straight-to-DVD release shows the "Joe Dirt" actress in a menage a trois and some tub soaking.
# 4. Bai Ling in "Edmond" - She gives William H. Macy and the viewers an eyeful at a peep show.
# 5. Jennifer Aniston in "The Break-Up" - Rent the full-screen version for more of her butt during her windy walk.
# 6. Barbara Nedeljakova in "Hostel: Unrated Version" -You get your pick of five actresses who show skin in this film, but Barb had Mr. Skin's vote for her sex and sauna scenes.
# 7. Kelly Brook in "Survival Island" - A woman, her husband and their manservant engage in lots of outdoor action.
# 8. Kyra Sedgewick in "Loverboy" - Kevin Bacon directs his wife getting it on in the library and in various other scenes. Bonus footage of Marisa Tomei in a bath.
# 9. Amanda Righetti in "Angel Blade" - Shot in 2002, but released to DVD this year, this "O.C." guest star plays a stripper who likes sex and showering.
# 10. Lauren Lee Smith in "Lie With Me" - Alone, with a partner, with a partner and an audience ... she just likes getting nude.
Posted by Shurbhi.in at 01:55